Dakshin Dinajpur houses many historical places as well as archaeological sites. The district is also known for its unpolluted panoramic landscapes surrounding by forests and stretches of plantations.  Khanpur in Balurghat Block of Dakshin Dinahpur is known for its historical “Tebhaga Movement”. This place has become a must-to-visit for the history lovers as well as common tourists because of its relevance to the history of our country especially the State West Bengal.

About 18 KM away from the Balurghat Town in the North-East, Khanpur, a place that is still remembered as an origin of “Tebhaga Movement”, is located. Those who come to Balurghat to enjoy unspoiled natural beauty and clean fresh air will definitely find Khanpur a very different yet an important place to visit. 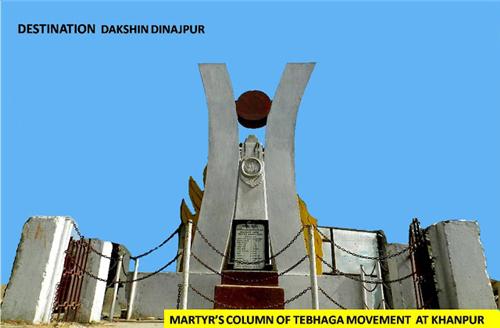 Khanpur is known for its historical significance because in the year 1946, the famous “Tebhaga Movement” started here. The sharecropper of this area had become united and a movement was raised so that sharecroppers could have 75% share of the crops they are growing. As India was under the British Rule at that time, the British Forces along with the local landlords (Zamindars) tried to curb the movement taking extreme measures like setting fire, ransacking the villages and houses of sharecroppers, rape etc. Despite such oppressions, the sharecroppers did not stop and the movement flared and there were no signs of subsiding of the movement. “Tebhaga Movement” got the support of the local cultivators too.

A group of large British police force went to Khanpur on 20th February 1947 to arrest the prominent leaders of the movement. To stop the police force, local roads were cut and disconnected by the locals under the leadership of  Chiarshai Sekh. After reaching Khapur with lots of difficulties, the police force arrested Sri Gajimuddin, Sri Gopeshwar Das Mohanta, Smt. Jasoda Rajbanshi, Sri Ghutui Kolkamar and Sri Sashi Burman.  Smt Jasoda Rajbanshi was the wife of Sri Nilkantha Rajbanshi, the party secretary.

Though the police managed to arrest the above mentioned people but while they were taking them, a huge number of local people along with their courageous leader Chiarshai Sekh snatched away the arrested people and damaged the police jeep badly.  121 rounds of open firing had happened on the public by the agitated police force and about twenty cultivators were spot dead. Among the dead were the cultivators from various castes like the Hindus, the Muslims and the Scheduled Tribes. Visitors can get to see a memorial at Khanpur having the names of these martyrs inscribed on it.

Places to visit around Khanpur

How to reach Khanpur