When you are tripping in Balurghat Town, a must visit place is the Bolla Kali Temple. An historical temple dated during the British period, it is a temple where Maa Kali, a swarup of Maa Durga is worshiped by the devotees. It is located on Malda-Balurghat Highway. The local people believe a legend about the Bolla Kali Temple. It is believed that a local Zamindar was arrested and detained by the British authorities due to the fact that he was not able to pay taxes for the Zamindari.

When the Zamindar prayed to her, Goddess Kali came to his rescue and he was freed on the next day. The day was Friday after the Rash Purnima. As per his resolution, he built a temple which is known as the Bolla Kali temple for her and started worshiping. 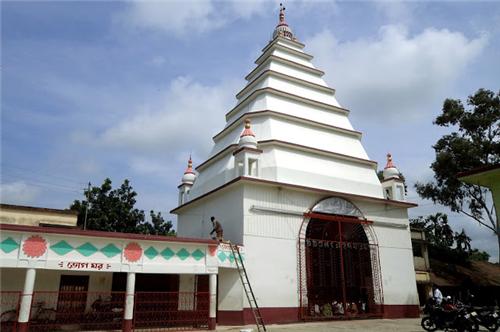 It is one of the famous temples which is visited by the people who are living in the district around the year. The temple has a separate room for preparing the daily Bhog (the food for worshiping purpose). The devotees who come to the temple during the Bhog time get the Bhog in small amount as a Parsad. The main Kali Puja is held on each Friday after the day of Rash Purnima. On this occasion, the temple is decorated and a fair is organized for three days. Thousands of the devotees from all over the district and around district visit the temple for worship and enjoy the fair.

You can worship Maa Kali in Bolla Kali Temple and enjoy the architecture from the British time period. Also, if you visit the temple on the occasion of fair, you can enjoy a glimpse of the local culture at the time.

The weather is pleasant and there is no threat of the rains at this time. You can also visit at the time of fair and enjoy the festive occasion with other people.

How to reach Bolla Kali Temple

If you are visiting Balurghat for business or pleasure, you can also make a visit to Bolla Kali temple for worshiping Goddess Kali. It is just 20 km and half an hour away from the Balurghat town. You can hire a taxi or go by the bus. You can get accommodation at the Balurghat town.